In the complex task of translating the Bible, it is helpful for a translation team to break the process down into manageable and measurable steps. The new Oji-Cree translation team is working on the project chosen by their church and community–that is, the scripture verses contained in the weekly (Epistle and Gospel) lectionary readings used in Sunday Services.

You can see a progress chart showing these steps at one of our previous posts Northern Translation Brief 05Oct2016.

After the team accomplishes these four steps, the passage is ready for step five, a checking session with a Translation Consultant. A translation consultant is a person trained in linguistics, cross-cultural studies, Biblical languages and content, along with in-depth experience working in minority-language translation programs in the field.

In January 2017, the New Oji-Cree Bible translation team had their first “Consultant Check”.

On Monday Morning, January 23, Norma Jean and I drove to Ruth Heeg’s house in Waterloo, Ontario, and her husband Dick drove us to the airport in Toronto. Ruth brings extensive translation experience in a lifetime career of Bible translation in Wycliffe and also as a translation consultant with the Bible Society.

We met up with Meg Billingsley at the airport. Meg is a “translation consultant-in-training” and is being mentored by Ruth. Meg also has had several years of field experience in translation projects for Plains Cree in Saskatchewan and Mik’maq in Nova Scotia. We all checked in at the airport and flew together to Thunder Bay, Ontario, and spent the night there. 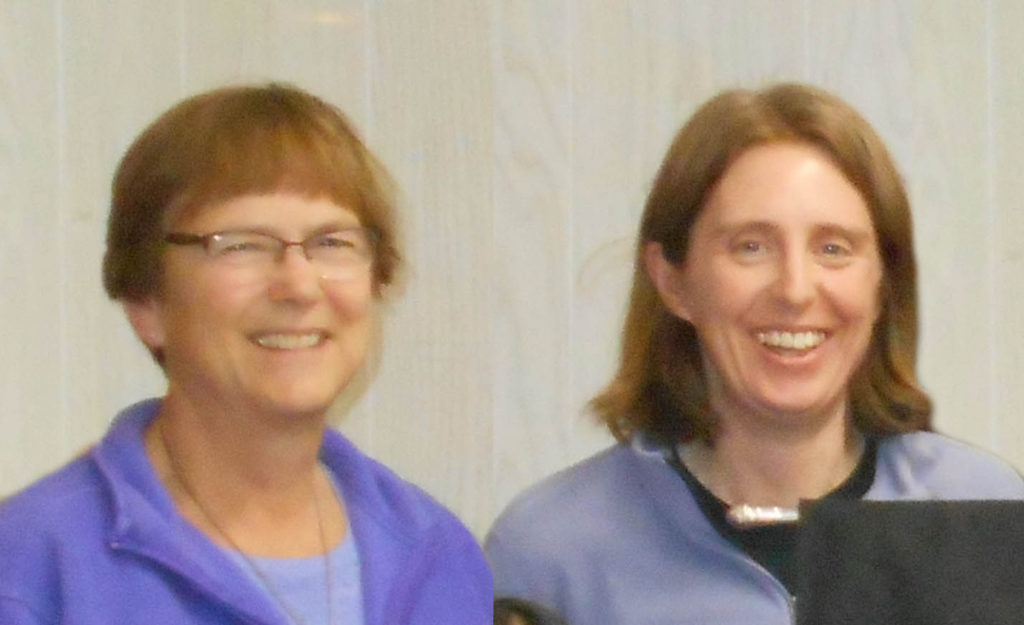 On Tuesday Morning, January 24, we got a message from the airline that serves the remote First Nations communities in Northern Ontario (Wasaya) that there were weather delays, and that our plane would not leave Thunder Bay until mid afternoon. So we had breakfast and lunch together. We had planned to arrive in Kingfisher by 10:00 in the morning on Tuesday. That was not going to happen now. 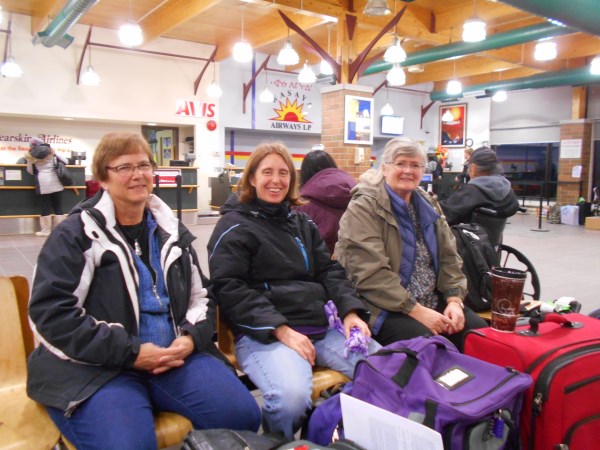 After flying to Sioux Lookout in the afternoon, we got on the late plane to Kingfisher, but it was still snowing and foggy, and so after flying up and “over” Kingfisher, the pilot turned the plane around and we went back to Sioux. By now it was 8:30 PM. So we spent one extra night en-route at Sioux Lookout. 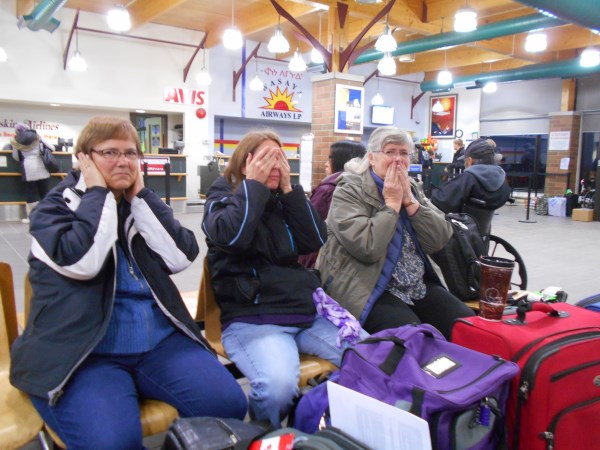 On Wednesday Morning, January 25, we got up early to go to the airport, and we were put on the “waiting list” for the morning flight up north, which was also cancelled by weather. Finally, they put us on the late flight in a bigger plane (a Dash-8) so all the folks who could not get north in the past few days could all go together. The only hitch was that we were told that our bags would follow later. We finally got in to Kingfisher Lake at about 8:30 PM on Wednesday night after spending both Tuesday and Wednesday at the airports. 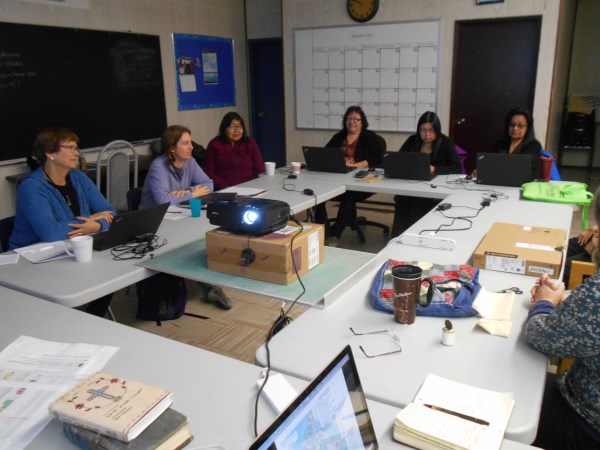 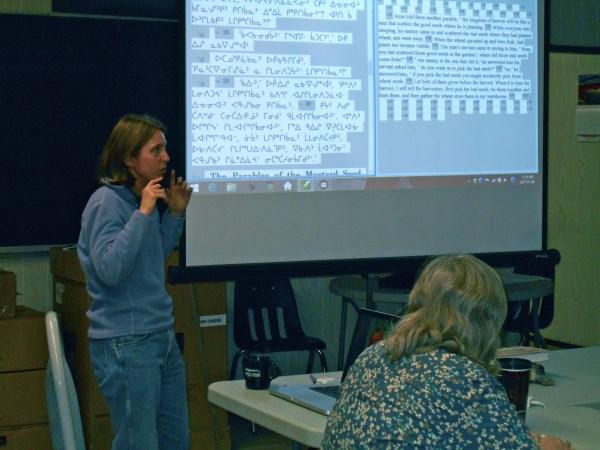 Working on the text 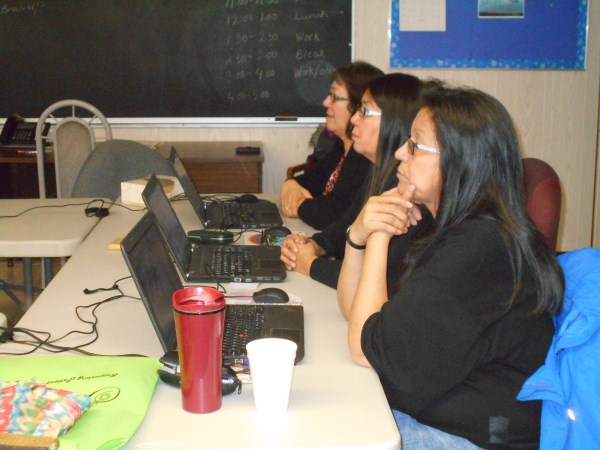 Each day we would begin with devotions and a Bible reading in the Oji-Cree language, prayers and a (Cree) hymn, and then I would turn over the workshop session to Ruth and Meg. I first briefed the team on the purpose of a consultant check, and then Meg got right into it with the passages that she had prepared. The entire team worked together, with one team member (Jessie) handling the updates and revisions to the text and another (Zipporah) updating the back-translation. All of the team participated and answered Meg (and Ruth’s) questions.

Their former Bishop of the Keewatin Diocese, Rt. Rev. David Ashdown, came for the weekend for services in the community. He preached in all the services, and they were well attended. One of the major Sunday services (the “English” service, held in the afternoon) was held in the school gym, being larger, and it accommodated the “blessing of the school”. At this service, the new Oji-Cree translation of the Epistle and the Gospel was read in the local language, and the translation was well-received by the large Oji-Cree speaking congregation in attendance.

Bishop Ashdown and Bishop Lydia also performed a consecration service for the new chapel in the lower level of the Mission House. It was named the “Chapel of the Holy Elders”, being named in honour of the Oji-Cree elders who were instrumental in the early Christian life and self-determination of the diocese of Mishamikoweesh. 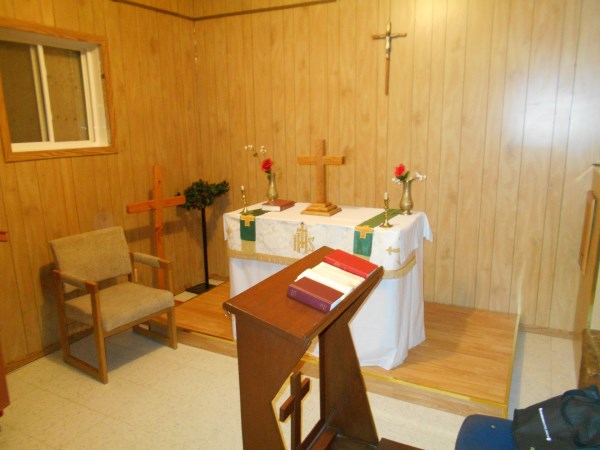 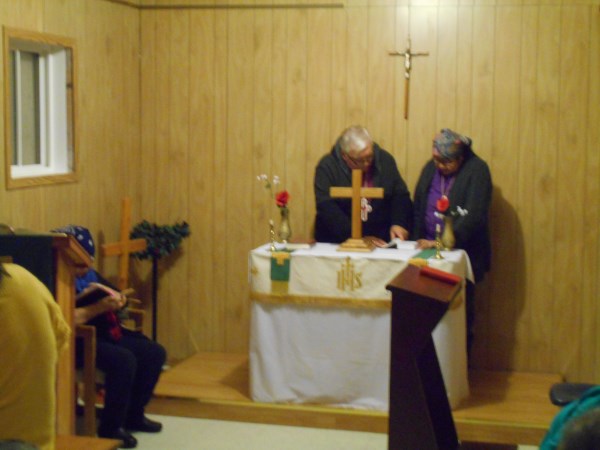 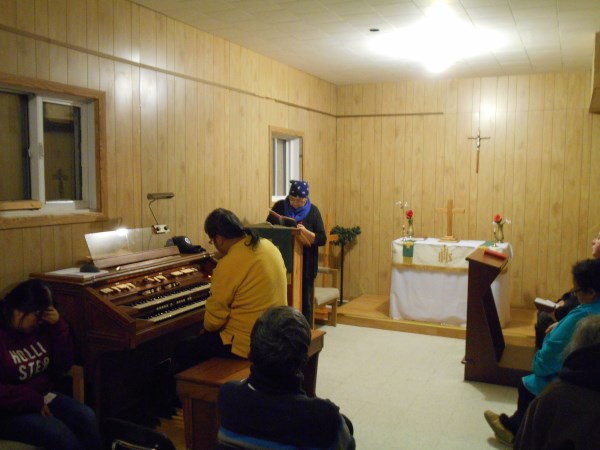 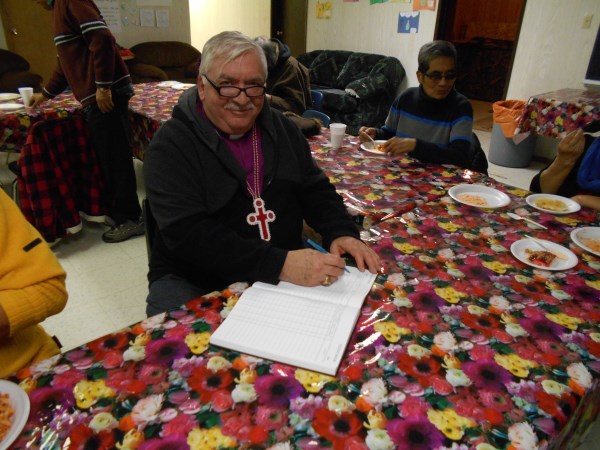 Norma Jean and I then participated in the new Sunday School that the translation team from Mission House has set up, in anticipation of the trip that we have planned to work with the Oji-Cree Christian Education team on Vacation Bible School this July. We are hoping to bring some people from our home church in Simcoe, ON to assist at this, Lord willing. 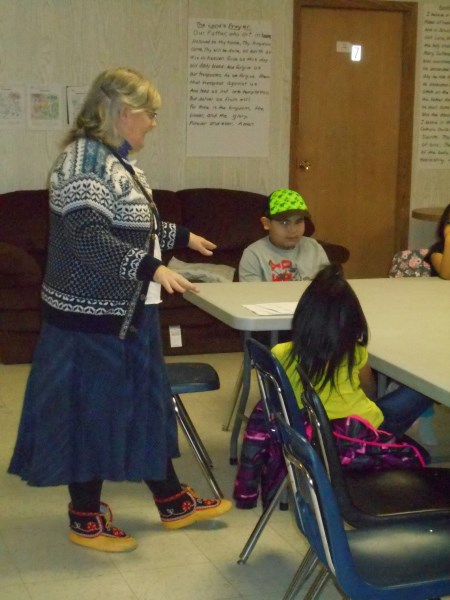 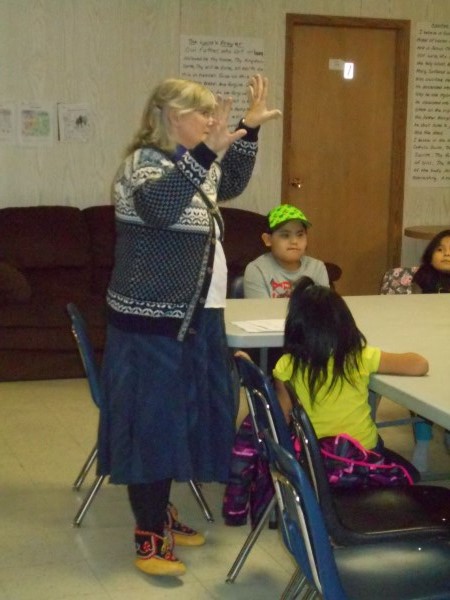 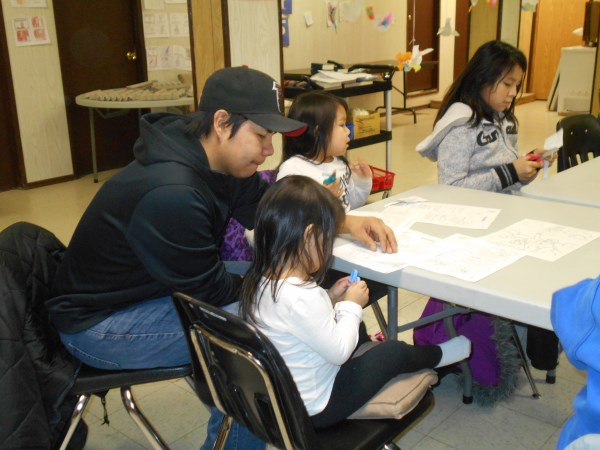 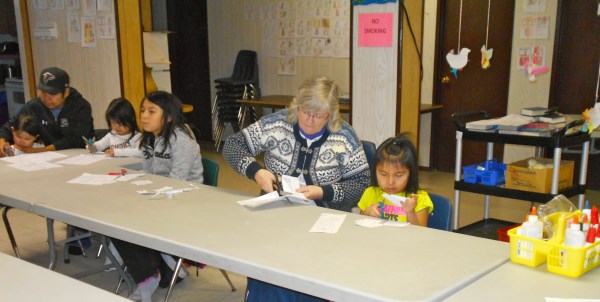 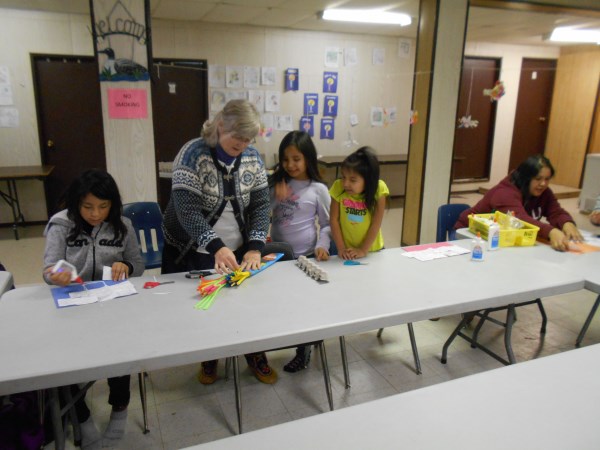 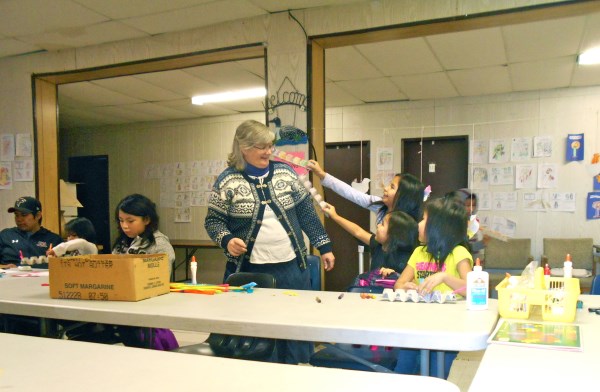 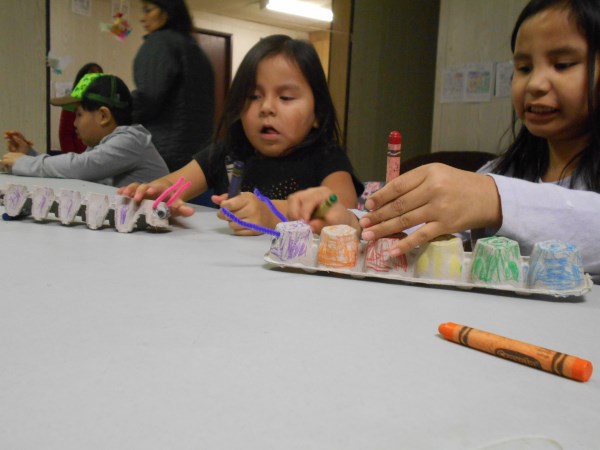 Norma Jean also led the translation team in the production of a scripture engagement project, a church banner with “Love One Another” (ᓵᑭᐦᐃᑎᔪᐠ in Oji-Cree) on it, from John 13:34. The team participated in the design and some of the sewing, but somewhat less than usual, so that they could give more time to the consultant checking with the translation consultants. 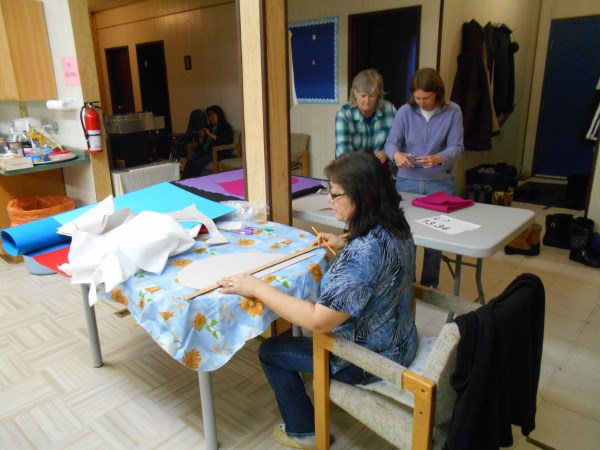 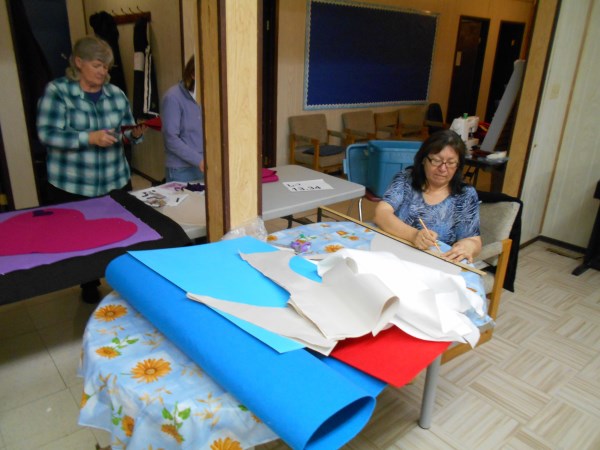 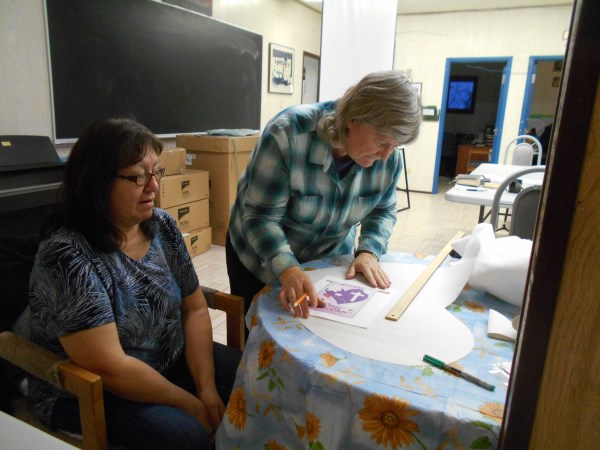 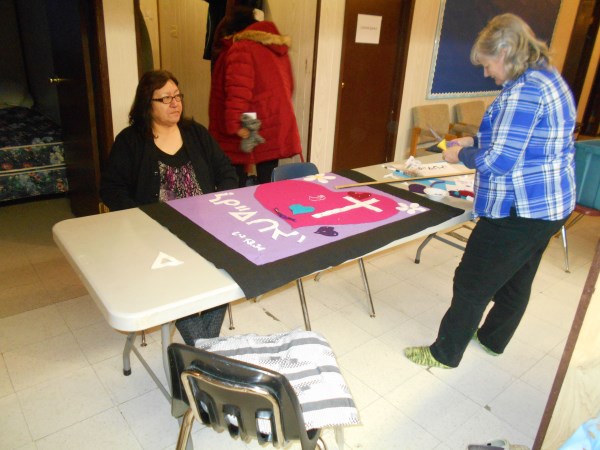 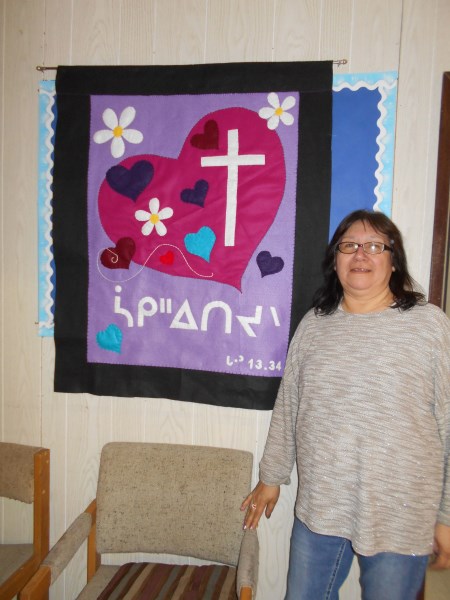 On Friday, Norma Jean met with the translation team and the Sunday School team to talk about a summer youth activity, “Vacation Bible School”. The Oji-Cree team suggested that the topic could be the story of Creation from Genesis. Norma Jean would be working with the translation team in the months to come to prepare culturally-appropriate Sunday School and Christian Education curriculum that more closely corresponds to indigenous life in the north.

The team told us that they wanted to be sure that the Gospel was clearly presented throughout the week, so that the children had an opportunity to hear and respond to the good news about Jesus. The Oji-Cree team also said that any helpers from outside the community should not simply come up and conduct the Vacation Bible School themselves–but rather that the activity be used to train the Oji-Cree Sunday School teachers and staff to learn how to conduct and present a Vacation Bible School program. With this in mind, each of the activities would be presented in both the Oji-Cree language and English, with the Oji-Cree Sunday School teachers fully involved in all activities with the Kingfisher Lake children. 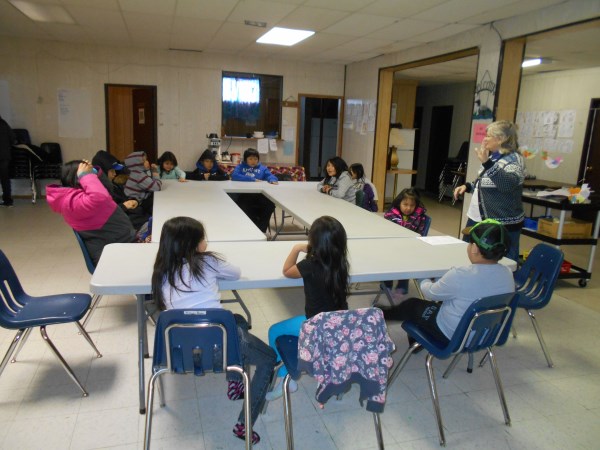 The dates that they proposed for this summer’s Vacation Bible School activity in Kingfisher Lake are July 17th to the 21st, just after the Dr. William Winter School.

On Saturday, we met to talk with Bishop Lydia who shared her ongoing vision for the Oji-Cree translation project, future plans, and the kinds of support and help that they would like from us. She said that she will be meeting with some of the church leaders in the area of her diocese (in northern Manitoba) that speak the Swampy Cree language about the possibility of having a similar translation project started in one of the Swampy Cree communities that she has spiritual leadership over. She suggested that “Split Lake” or one of the other communities near there might be a possibility.

Bishop Lydia asked Bill to help her with her diocesan website, and also help to expand the Oji-Cree translation project so that so that the team can work on the translation of other Bible- and worship-related materials (such as Prayer Books, Christian Education Materials and Hymnals) into the Oji-Cree language.

When we discussed the future, which included having Meg continue to check scripture as it becomes ready, the question of regular communication with the translation team came up. The team suggested setting up a private Oji-Cree Bible Translators “Facebook Group” to do this. This way Meg or any other member of the team may be able to call them all together using a Facebook message to the group, and then ask consultant questions either on Facebook Chat or Skype. 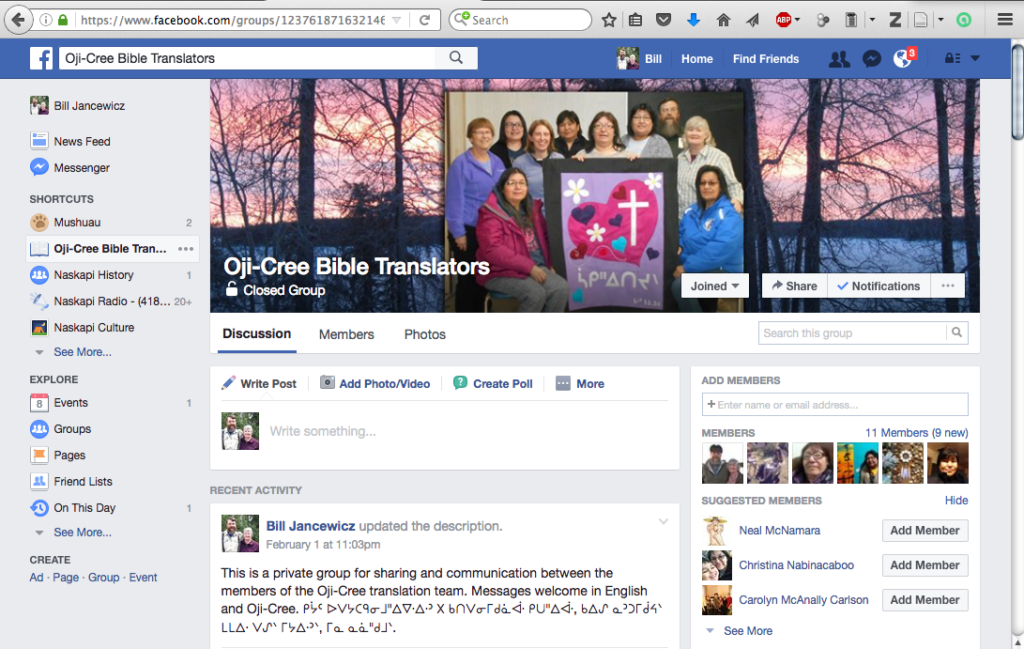 Wrapping up the Workshop

The weather cleared on Monday, January 30, and we continued to work all day as before, with Meg doing most of the checking sessions. Bill also presented a training module about key Biblical terms (we accumulated a number of new ones in Oji-Cree during the checking) and how to use the Paratext computer program to keep track of these.

Bill also set up a new work computer for their newest team member Saloma Sainnawap, and he did general computer maintenance and software upgrades on all the other team computers. He also looked after equipment and “technical details” in general while Meg (and Ruth) ran the checking sessions. 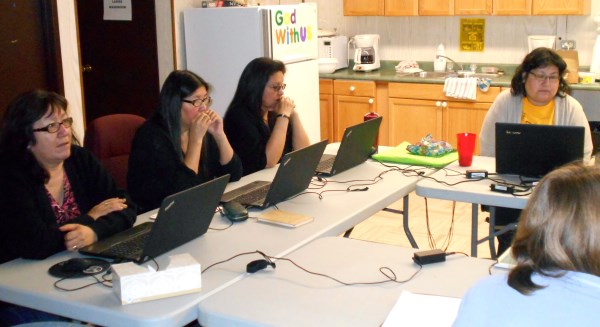 As a new translation consultant, Meg handled herself very well with the Oji-Cree team, being sensitive to their needs and their level of ability. They said that they would be eager to have her come back to continue work with them as the need arises, and we feel the same way! 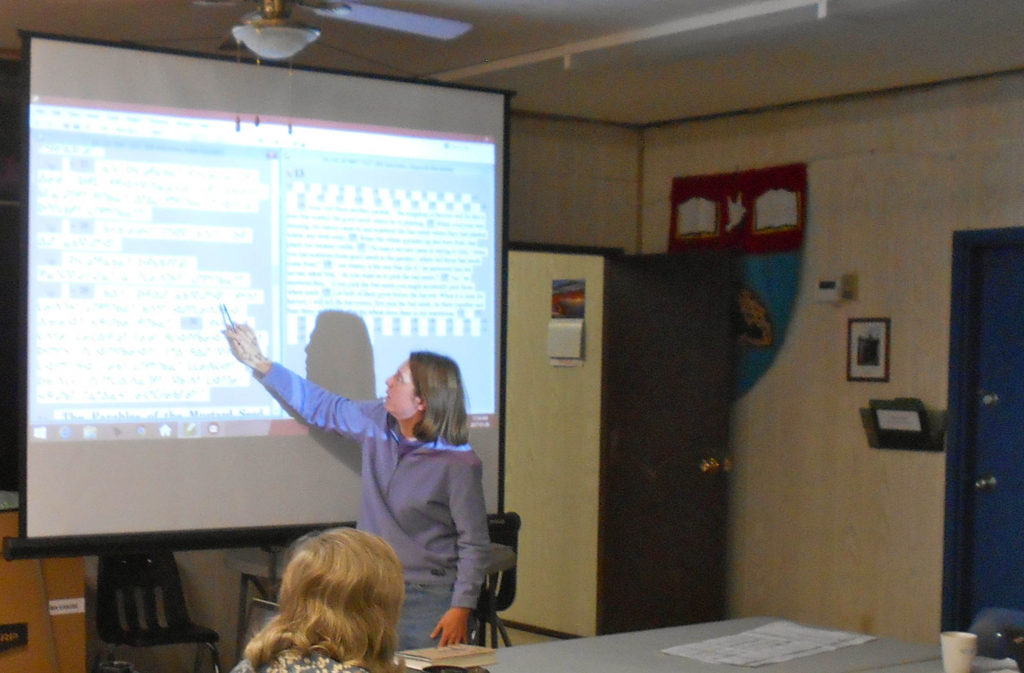 Coming back home on Thursday February 2 we were delayed by about an hour at the Kingfisher Lake airstrip waiting for the plane to arrive, but they made up the time by transferring us quickly between planes in Sioux. The flight back to Toronto was fine, but Norma Jean’s bag was lost in the Pearson baggage handling area. It was delivered to our house the next day. Ruth’s husband Dick picked us up. We had a late supper, Meg got a ride home from the airport by a friend, and we got home to Windham Centre late at night on Thursday, after picking up our car at Ruth’s. 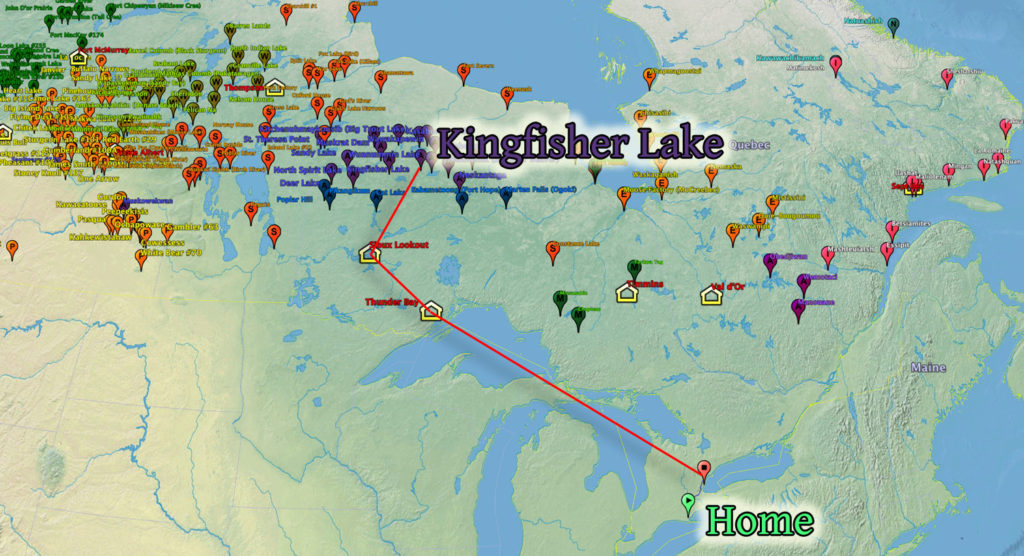 All in all, it went well, even after missing two days of work because of flight delays.
Thank you for your prayers and especially thanks to God for His work and word in the lives of the Oji-Cree people. 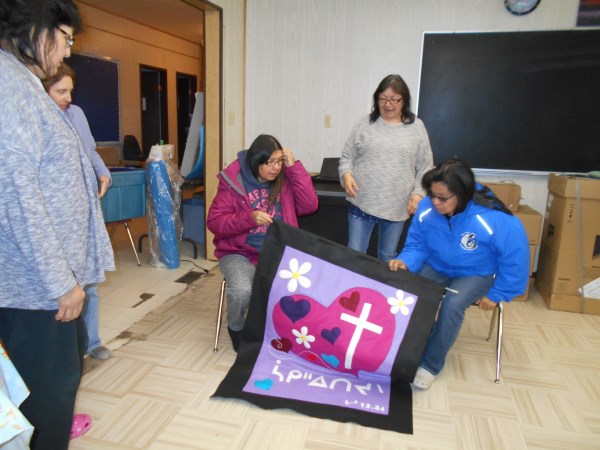 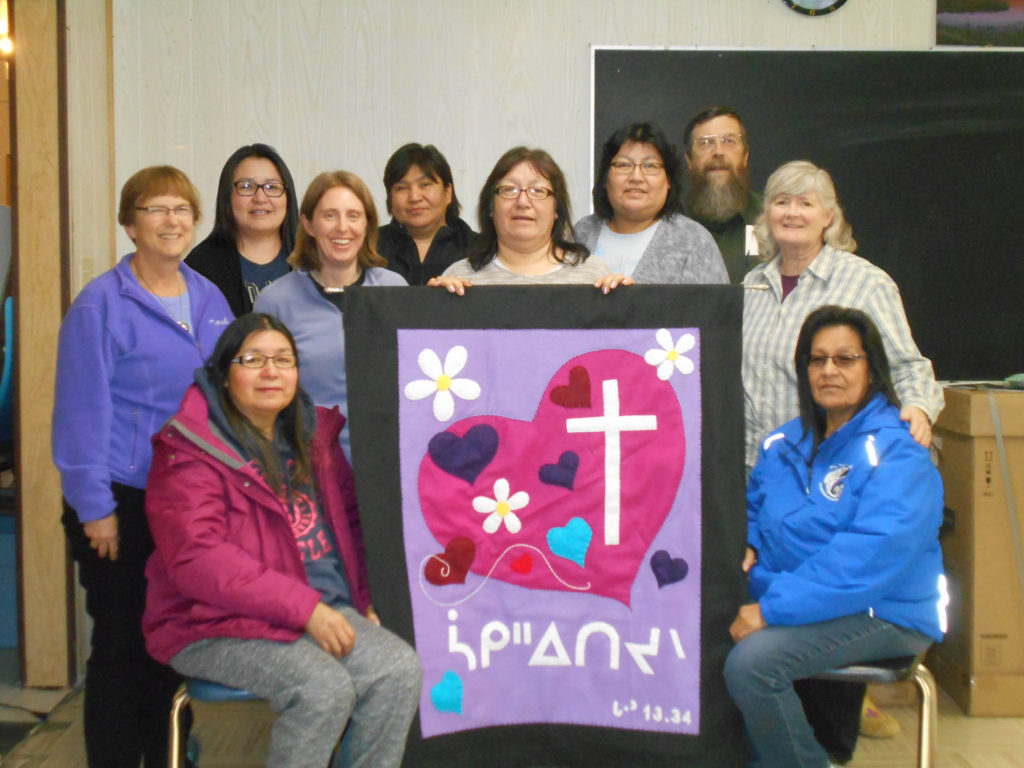