A few weeks back we sent out a newsletter [link] to everyone, and from the responses we got from many, it seemed to raise more questions than answers! 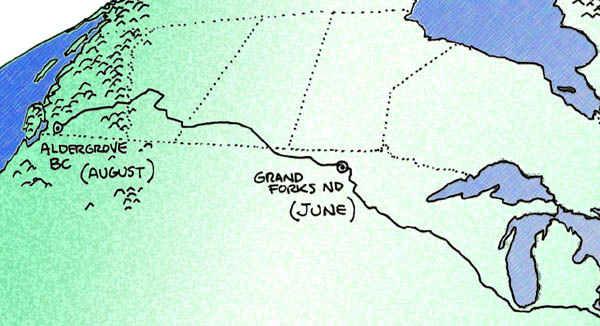 Most questions like this one were expressions of surprise that we had moved at all! We apologize that we had not made this clearer in earlier messages. Last January [link] we mentioned Norma Jean’s plans to pursue graduate studies of her own to in mother-tongue and multi-lingual education, building on her experience and work with Naskapi and Innu. At that time, she had not yet been accepted into the program at Trinity Western University here in BC, so we were still waiting ourselves for that direction.

At the same time, our son Nicodemus was considering his own transfer to Trinity Western University after having completed two years at Three Rivers Community College in Connecticut. When both Norma Jean and Nicodemus were accepted, our plans started to become more clear.

In order to better serve the Bible translation and language development needs of Naskapi, Innu and other First Nations people groups across Canada, we have been encouraged by our Wycliffe field administration to continue our professional development which includes completing our graduate degrees. Bill accomplished this during five summers at SIL-UND, and earned his MA in linguistics. Norma Jean started her MA program in August here in British Columbia. The program Norma Jean is taking has components that help broaden her insight into language education for First Nations people, which she has already been involved in for several mother-tongue communities [link], [link]

It has also been a great opportunity to be here where we can connect with Nicodemus and encourage him in his own undergrad program.

Another answer to a “Frequently Asked Question” coming soon!

Serving with you, Bill and Norma Jean Jancewicz